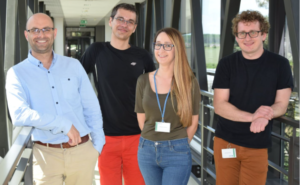 ARS receives research grant LIDER from the National Center for Research and Development !

here are some links:

ARS receives his habilitation degree for his work on „Application of supramolecular and dynamic covalent chemistries in the development of complex chemical assemblies”.

ARS received HOMING PLUS grant from the Foundation for Polish Science and set up his research group in the Department of Chemistry at Adam Mickiewicz University in Poznań !